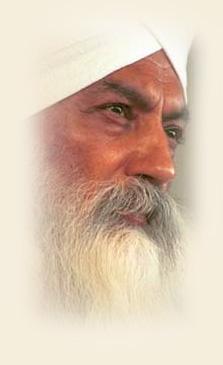 His credo: “It’s not the life that matters, it’s the courage that you bring to it.”

His challenge to students, “Don’t love me, love my teachings. Become ten times greater than me.”

Siri Singh Sahib Bhai Sahib Harbhajan Singh Khalsa Yogiji, also known as Yogi Bhajan was the chief religious and administrative authority for the Ministry of Sikh Dharma in the Western Hemisphere. A deeply devoted Sikh, his inspiration and example motivated thousands to embrace the Sikh way of life. Through his personal efforts, Sikh Dharma was legally incorporated and officially recognized as a religion in the USA in 1971.

Yogi Bhajan was a Master of Kundalini Yoga, the Yoga of Awareness, and a dedicated and inspired teacher. Since arriving in the United States in 1969, he dedicated himself to bring meaning, dignity and a reconnection of Spirit into the lives of people everywhere. As he worked diligently to spread the science and practice of Kundalini Yoga throughout the Western Hemisphere and beyond, Yogi Bhajan became widely recognized as a world leader and champion of world peace and healing.

Throughout recorded history, a handful of spiritual giants have arisen as dynamic catalysts for the advancement of human consciousness. Their revolutionary teachings and their very presence on the planet have accelerated the progress of millions of souls. Such a master, a Teacher of teachers, was Yogi Bhajan.

He was not just a philosopher nor was he a preacher. He was a true Teacher in every sense of the word, encouraging others to attain the same mastery that he had achieved, and more. “Become ten times greater than me.”

An ardent advocate of world peace and religious unity, the Siri Singh Sahib met with world leaders of all faiths to encourage dialogue, including Pope Paul VI, Pope John Paul II, the Dalai Lama, and two Archbishops of Canterbury. His openhearted acceptance of everyone, along with an uncompromising insistence upon excellence, made him a formidable teacher.

Yogi Bhajan left his physical body on October 6, 2004. However, the legacy of his teachings and his inspiration live on and the light of his spiritual essence continues to shine and to bless the entire humanity.

“The greatest mantra of the time is “Keep up”. Keep up and you will be kept up. “Keep up” is not a small mantra. If you ever want to know who you are and experience what you are and where you are, just keep up. The world shall bow to you.” 3/27/79

If you wish to make a donation you can do so via cash, check or electronic funds transfer. If paying by check, please make payable to "Sikh Dharma" and mail to: Sikh Dharma of Virginia - 17151 Bold Venture Dr. Leesburg, VA 20176" or you can easily make a donation online here: